A History of Hearing Aids

Hearing aids are a remarkable feat of technology in modern times. They allow those with hearing impairments to experience the world around them and engage in social activities without embarrassment, but it wasn’t always so simple. In fact, the first “hearing aid” was a sort of trumpet, and it wasn’t until the invention of the telephone that hearing aid technology evolved in earnest.

A Timeline of Hearing Aid History

Hundreds of years ago, in the 1600’s, hearing aids were rudimentary and limited. At that time, ear trumpets were the only available option for those with hearing problems. They functioned as you would expect, with sounds being “captured” in a funnel and directed into the ear. These hearing trumpets were typically made of sheet metal, silver, wood, snail shells, and animal horns.

In 1800, Frederick C. Rein began commercial production of ear trumpets in London. He even designed a custom acoustic throne for the King of Portugal. The throne was designed with open lion’s mouths carved into the arms. The mouths of the lions funneled the sounds through special tubes and into the king’s ear. Rein also created ear trumpets for Ludwig van Beethoven.

The late 19th century also saw the creation of wearable acoustic horns, including hearing aid devices and horns that could be worn and concealed within hair and headgear.

The first hearing aid was developed in 1898 by Miller Reese Hutchison who was able to utilize the recent invention of the telephone and microphone as a basis for an electric hearing aid.

Siemens was one of the first companies to manufacture hearing aids based on Hutchison’s designs. Unfortunately, they were bulky and had some portability issues as they were about the size of a tall cigar box. The company is still around and continues to produce hearing aids today.

A Naval engineer patented the first vacuum-tube hearing aid. This latest development was easier to carry at only 7 pounds.

During the next two decades, the vacuum tube hearing aid increased in popularity and further advancements allowed the device to decrease in size and eventually become portable.

In 1936, the first wearable vacuum tube hearing aid became available in England, with America to follow a year later. World War II led to military technological advancements that resulted in further miniaturization of the hearing aid.

Transistors were developed by Bell Laboratories in 1948, replacing vacuum tubes with their small size, reduction in battery power, and decrease in distortion and heat. Unfortunately, the transition was too swift and not thoroughly tested. Body heat and moisture caused the hearing aid to die after just a few weeks.

The first all-transistor hearing aids were offered by Zenith. The company was the first to come to the conclusion that body heat was impacting the life span of the devices.

Texas Instruments began producing a silicon transmitter which was determined to be more effective than previous versions. 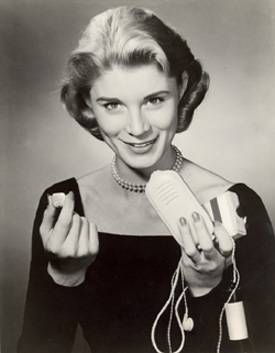 The integrated circuit was invented by Jack Kilby at Texas Instruments and marked the end of the transmitter. Over the next two decades, the IC technology would be perfected in hearing aids.

After decades of testing, analyzing, and continued developments in digital technology, the first real-time, all digital hearing aid was created. The hearing aid included a digital array processor and micro computer, which in turn consisted of an FM radio transmitter and receiver. Unfortunately, the hearing aid was incredibly heavy and impossible to move!

The Nicolet Corporation created the first commercial digital hearing aid. The device consisted of a processor worn on the body, with a hardwire connection and an ear mounted transducer. This latest offering proved unsuccessful with the public and the company folded, but it did act as a catalyst for development at other companies.

These days, hearing aid technology is continuing to advance at a rapid pace. Digital hearing aids are now programmable, which allows for the regulation of sound and automatic adjustments that are based on the audio environment.

Some researchers are also examining the hearing of insects, which may result in even smaller hearing aids, or biological modifications that further improve sound quality and hearing.